We Were Beautiful Once Chapters from a cold war 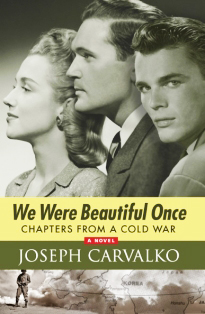 a small town lawyer ventures into a web of betrayal, murder and corruption in this legal-suspense thriller to solve the mysterious disappearance of a POW during the Korean War. Using the courtroom juxtaposed to the battlefield, Carvalko methodically takes us through how a soldier MIA behind enemy lines has a profound effect on the lives of those left behind. Out of two rooms over Zorba’s Luncheonette, Nick runs what the local white-shoe firms call a one-lung law practice. On behalf of the family searching for their brother, Nick sues the U.S. Army to uncover the truth behind Pvt. Roger Girardin’s whereabouts, following the end of hostilities. The trial causes three individuals, who knew Girardin, to confront the fears and animosities that have kept them fixed to a past that began before the war and continued afterward in the wake of the soldier’s disappearance. One man, ex-POW Jack O’Connor, kept secret what he knew about Girardin’s captivity to protect his sister Julie, who was also Girardins sweetheart. Suffering from PTSD O’Connor becomes increasingly unhinged under the obsession that he may have played a key role in the missing man’s failure to be repatriated. Trent Hamilton, a friend of O’Connor before the war, was an intelligence officer during the war and also may have played a part in Girardin mysteriously vanishing. Nick’s attempt to solve the mystery unwittingly tightens the noose around Hamilton’s activities as he is drawn deeper into the case, threatening his defense contracting business and political ambitions. Carvalko brings a certain authenticity to the plot as a veteran and trial lawyer who actually brought the Army into Federal Court to answer to the whereabouts of a POW.

The Techno-Human Shell A Jump in the evolutionary gap 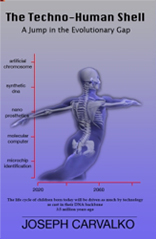 The Techno-Human Shell-A Jump in the Evolutionary Gap, discusses smart prosthetics and medical devices for therapeutics, particularly the implications of the proliferation of in-the-body technologies to augment and enhance physical performance, intelligence, extending lifetimes and controlling technology outside the body via digital I/O and thought. It looks at the history of a number of therapeutic devices, such as the modern pacemaker, as well as the current state-of-the-art and conjectures as to where science and technology is headed. For example, medical and prosthetic technology now verge on incorporating directly into our anatomy processors with the computational power of the famous Watson IBM computer and Internet-like communications. We witness Pistorius using twin prosthetics to achieve Olympic fame, and Hutchinson, paralyzed by a stroke, mind-control a robotic arm through a brain implanted sensor about the size of an 80 mg aspirin. Other advances will soon come from the merging of synthetic DNA and artificial intelligence that together will bring new diagnostics, medical treatment and smart nano-prosthetics well within the horizon of the next generation. A prosthetic genome hastens the day when artificial and enhanced life forms, such as human organs, can be made entirely from a fusion of living organisms and non-living materials.

The book delves into how, overtime, artificially altered and controlled metabolisms may begin to alter the progression of natural biological evolution. At what point does the widespread application of cyborg-assisted-life change our attitudes about what the notion of human means. The book also focuses on the moral implications of the new technology, its influence on culture, personal identity and autonomy, and why we need to begin a national conversation so that we can prepare for what inevitably lies ahead.

All Books by JOE CARVALKO