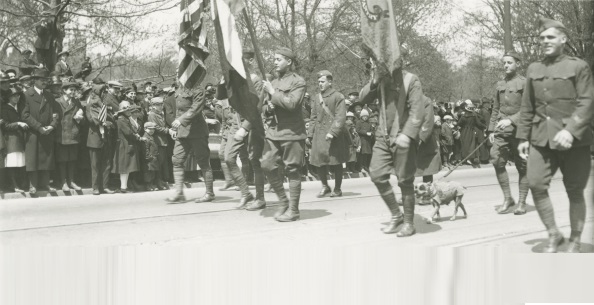 Few of us can say they knew someone who fought in WWI. Tuesday, May 8, 1945, VE Day, when war ended in Europe for the second time in a quarter century, my mother rushed me out of the apartment to join a mass of people, who cheered as soldiers from WWI paraded down Main Street. My grand-uncle George, who fought in WWI and suffered the long effects of being gassed, had recently died. A couple years later our neighbor Mr. White, a WWI vet, France in 1917, gave me his gas mask, jacket and helmet. I still have his jacket; it’s over 100 years old.

You ask when’d my son gone off to war—, well, after we stopped schoolin’ kids, there’d been a last one; after the limbless and deaf that’d served . . ., dropped dead; after mums and dads who’d lost boys, grow’d old and passed—after all ’minders of the last un’ was forgot; after the pockmarked, lumpy fields that staked Jesus crosses in a weed-ridden patch lost traces, of a no-man’s-land betwixt windin’ trenches below fields of spiny trunks, craters the size of babies, the stink of phosgene and chlorine—; where dogs no more go and birds no more sing—.
That’s when.

In the winter of 1917 foes faced two sides of Sisyphus. Trenches by day, no man’s land by night, when they hazarded into mortars, bullets, and gas that filled the void, when life left breathing could swallow the deadly dark in an endless cycle of terror and the question, “Are you ready men?”

Never had a kid— or pretty wife,
Want one last gasp to savor life
To say goodbyes ’fore I go
To lower the flag, the pipes to blow
To hear the drummer’s roll, I fall
Face down choking in a muddy pall
Gas, gas, gas

In the dark
of winter days,
he lays a lily
for his Rose
beneath crossed poles
in a winter
that cycled back like a hungry dog.

A child still born,
en hiver as they say,
passed unhurried;
it snowed
again,
in a winter
that cycled back like a hungry dog.

Snowed,
until spring,
when Mademoiselle
danced, Rouen
to Moulin Rouge,
in a winter
that cycled back like a hungry dog.

Her head in her skirt,
legs in the air—,
until, over there,
Mademoiselle
elle est morte d’être gazés.
over there,
in a winter
that cycled back like a hungry dog.