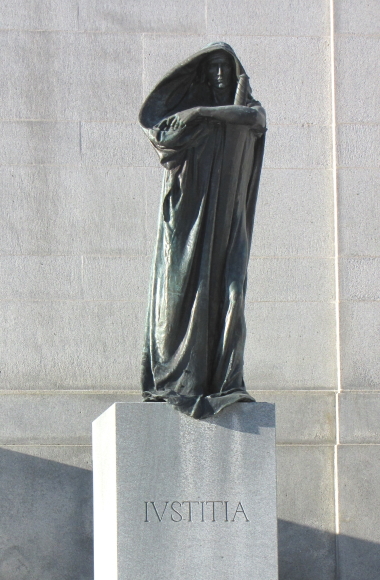 Cromwell: Suppose I were to take a dagger from my sleeve and make to kill the prisoner with it; and my lordships there, instead of crying out for me to stop, maintained their silence. … It would betoken a willingness that I should do it, and under the law, they will be guilty with me. So silence can, according to the circumstances, speak!
~A Man for All Seasons

On the heels of recent protests, I received an email from a law school colleague lamenting that he is “wrestling with sadness, anger, and possibly hopelessness over these . . . awful events.” Awful events indeed, but not surprising to many of us that know that the American justice system sits at the center of a deep and festering sociological sickness that did not begin with the recent deaths by police of fellow citizens, and which cannot be laid entirely at the feet of the police.

We turn to lawyers to keep the system vigorous and healthy within a framework of social interactions and diverse cultures that surround everyday life. For most of U.S. history lawyers have controlled Congress. Today they represent a third of the House members and just under one-half of the Senate members. In state legislatures they likewise serve in large numbers. The federal government employs as many as 80,000 lawyers, and of course local, county and states have their own legions.

As recent events once again demonstrate, many of these lawyers, and a fair number in private practice, have failed the country in the matter of racial justice. The questions are how and why? At least part of the answer may lie in a lawyer’s perspective as to what constitutes law, attitude surrounding what serves as justice, and fealty to its client. Let’s step back in time.

In its origins, as crafted by lawyers, the Constitution nullified Jefferson’s truism “all men are created equal” by openly acknowledging the institution of slavery, implicitly birthing a nation where wealth and the color of one’s skin would dominate cultural and institutional norms at the expense of lives. This legacy has spawned racism in nearly every instance of public life, backed and supported by lawyers throughout the country for a long as we have been a nation. Let me elaborate.

For every court case dealing with an issue of race, such as the unwarranted shooting of unarmed African-Americans by police, there were and presently are lawyers representing an interest on the side of justice and equality, and lawyers representing an opposing side, defending institutional power and upholding the implicit biases within the dominant culture. Although we citizens may not keep our eye on what transpires in the justice system day-to-day or even over time, those who take up the mantle of law, elected officials, lawyers, judges, and law professors, often take up the cudgels of the powerful, shutting their eyes to the millions of victims of racism in American life.

Let’s be clear, in the main it was lawyers, who crafted the document that excluded slaves, Native Americans and women from social, and political life. And, although we have made strides to rectify those conventions, thousands of lawyers forcefully defend instances of discrimination in employment, LGBTQ rights, housing (redlining for example), immigration, and governmental entities that stand behind the unjustified violence against minorities by the police, every year.

Many people are reading or re-reading Michelle Alexander’s ‘The New Jim Crow’ to learn more about racism in the U.S. justice system. These are topics that require care in the classroom—but also topics educators can and should address.https://t.co/aFcqCuslpH

In every instance of alleged institutional bigotry, you can count on a lawyer coming to the defense. As stated earlier everyone is entitled to a defense, which applies not only to criminally charged defendants, but to parties in civil cases. But note that throughout American jurisprudence, in every case where discrimination and bigotry exists, some lawyer has defended its legality, which implies its propriety, uprightness, and morality. The catalog of cases number in the tens of thousands: not only for those most of us have heard about, such as Plessy vs. Ferguson (U.S. Supreme Court upheld the constitutionality of racial segregation laws for public facilities equal in quality) or Brown vs. Board of Education (U.S. Supreme Court held racial segregation in public schools are unconstitutional), but beyond these including lending, housing, and voting rights.

No one should hold it against any lawyer, because they represent a client accused of committing a crime. A just system allows everyone competent representation. But I take issue with the lawyer who adopts, either the tenets of a corrupt system or a client’s unmerited and unrepentant deviant behavior, which by any objective standard is unjust and constitutes a moral failing. Such as it is in the case of lawyers in their role as city attorneys, prosecutors and firms that regularly defend the police in instances of unwarranted shootings, at the expense of a rational system of justice, one that serves to produce outcomes that best reflect human rights.

Recent demonstrations have erupted because institutions, such as police departments and unions, hire lawyers that time after time succeed in having charges dismissed against police accused of unlawful homicides. The pattern is practically unbroken thus depriving we citizens the right to try these officers before a jury of their peers.

It’s safe to say that lawyers, whether private or governmental, more frequently than not, stand shoulder to shoulder with their client’s not only in a zealous representation as advocates, but often believe in the cause as framed by a theory of the case they represent. To be clear, a civilian being defended for engaging in criminal behavior maybe the notable exception, where advocates draw the line between representing a defendant and condoning their alleged crime.

It is an open secret that the reason police rarely suffer prosecution stems from a system that pushes prosecution to grand juries, who then hear these cases through state or district attorney presentations, which conveniently fail to persuade the juries to return a true bill. One recently publicized instance revealed that Minnesota Senator, Amy Klobuchar, in her role as Hennepin County district attorney failed to press charges against over a dozen officers accused of killing civilians during her tenure. She apparently offloaded the cases to a grand jury, and now claims she shouldn’t be held responsible for the resulting case dismissals. That having been said, law schools do a poor job teaching students the difference between representing a client’s legal rights and adopting a client’s misplaced values and deceits, albeit politically defensible and perfectly legal.

Some of the names are not here.
(banner drop) #Chicago#FreeThemAllpic.twitter.com/sviVMEeIyt

Estimates from the U.S. Bureau of Justice Statistics released in 2015 indicate that victims killed by police number around 1,240. Similarly, The Washington Post reported that in 2019, a total of 1,004 people were shot and killed by police. A statistic according to The Huffington Post stands out, in that since 2005 only 13 police officers have been convicted of murder or manslaughter in fatal on-duty shootings.

That so few prosecutions of police ever materialize or succeed beggars credulity considering that, at the federal level, conviction rates exceed 99 percent for civilians, who are prosecuted for crimes. But this efficient system of ours, according to a 2016 report of the National Registry of Exonerations, listed 1,900 defendants, who were convicted of crimes and later exonerated. A staggering 47% of the exonerated were African Americans. Note that the U.S. incarcerates about 2,150,000 people, the highest per-capita incarceration rate in the world—and overwhelmingly overrepresented by minorities. Behind all these convictions are prosecutors.

In the best case we might ascribe a lawyer’s defense of the status quo, as merely following the philosophy of a descriptive justice, where morality plays no role in the application or interpretation of the law. But, should we be satisfied that this version of law sufficiently offsets the moral imperative to protect the autonomy and the rights of minority men and women who have encounters with the police.

British philosopher, G. E. Moore (1873–1958) in his seminal work Principia Ethica (1903) wrote that when considering what’s good or bad, we should begin by asking two questions: ought the thing under inquiry exist? And, as it concerns an action, how ought we act? Although “good” in and of itself may well be indefinable, asking these questions has a common sense ring to it, especially when trying to answer the myriad ethical questions that surround whether unwarranted violent police actions that result in death should have an institutionally preferred outcome.

And, if we answer Moore’s query that an immoral system should not exist, how do we get this point across to law students, who are on their way to long careers in a profession, which in part may influence whether we survive as a nation, one that claims to be a beacon for equality. Before graduating any student lawyer, perhaps they should be required to understand the distinction between fair and vigorous representation of a client and perpetuating a justice system, which violates human rights. The answer is found not in the plain vanilla description of a law, but how we interpret law according to our commitment to equality, compassion and moral obligation.

So, yes, I’m wrestling with sadness, anger, and possibly hopelessness over these recent awful events. Maybe there is change in the air, where we can influence the next generation of lawyers, particularly as it relates to the immorality of devaluing life. It won’t come easy and may even seem like a revolutionary idea, where law schools teach, not one course, but offer concentrations that delve into the relationship between policing and human rights, and how attorneys choose between the interests of a client, one’s self, and the public generally.

As a lawyer, I urge my colleagues no longer to remain silent about our complicity in a system that supports racial injustice. As Cromwell observed, “silence can, according to the circumstances, speak!” And, if our silence remains the case, we should strike the word “justice” from the lawyer’s lexicon.