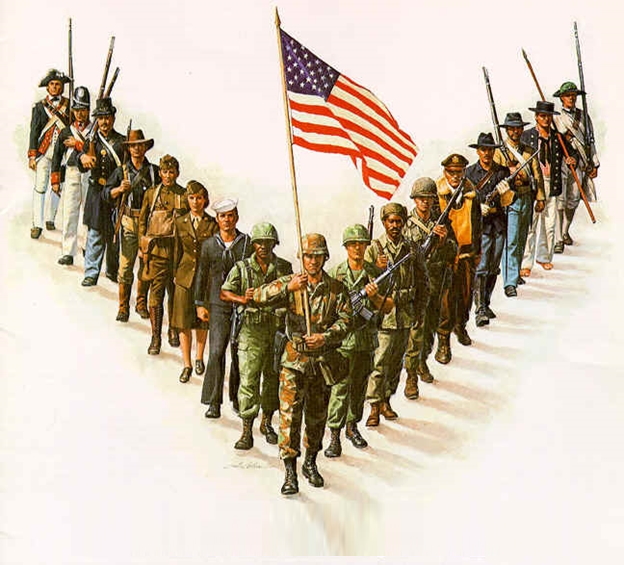 Each year on the last Monday of May this nation pauses to pay tribute to the men and women, who in military service to our country, died.  We pray for our heroic dead, who, in the words of the civil war general John A. Logan made their breasts a barricade between our country and its foes.

In anticipation of this special day each year I challenge myself to remember my first parade. WWII had just ended, May 8, 1945, my father had yet returned from fighting in Europe. I stood next to my mother watching men in uniform 4, 8 and 16 across, three times as tall as I, marching down Main Street, USA, echoes of brass bands playing in the distance, people cheering, clapping each time the skeleton of a new regiment crossed our line of sight. I remember three soldiers in wheel chairs from the Civil War, 1861, troops who’d fought in the Spanish American War, 1899, dozens of companies who’d fought in World War I, 1918, and then a jeep-filled procession of wounded from WWII, followed by those serving on the home front. Among those in the crowd were parents and grandparents, brothers, sisters, veterans and veterans to be, and those that would perish in wars yet named: the Cold War, Korea, Vietnam, the first Iraq War, a second Iraq War, Afghanistan, wars against ISIS, those that now serve around the world. Thinking about these times comes hard, time gradually erasing the details of scores of flag-waving parades I’ve witnessed in the course of a long life.

Let’s bow our heads for one moment to contemplate this solemn occasion. And, consider that our goal is peace, not war. Remember what Margaret Mead once said, “Never doubt that a small group of committed citizens can change the world – indeed, it is the only thing that ever has.” Poignantly, some wars end in peace, others don’t, they just stop killing wholesale. One hopes that Memorial Day can be set aside to show respect to those who gave their lives during armed conflicts, by focusing attention away from war, rather than its propagation.